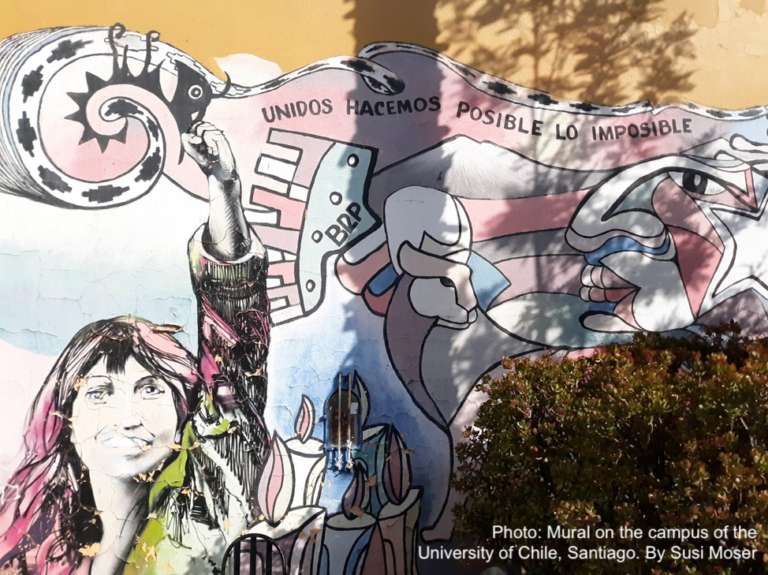 By Susi Moser. This post originally appeared on the SDG Transformation Forum blog.

October 20, 2019. The world is rolling with thunder. Thunder of very different kinds.

Two days ago, it was the thunderous applause of appreciation and celebration at the conclusion of the fourth international conference on social transformations to sustainability – Transformations 2019 – held for the first time in a southern country: Chile.

Yesterday, a friend and I took the opportunity while being here to hike in the high Andes. Resting at the foot of a rapidly retreating glacier in the unseasonable heat of a southern spring, it was the thunder of ice collapsing off the glacier’s edge.

Returning to Santiago in the late afternoon, a city suddenly in violent unrest as economic polarization and political discontent boiled over in response to a metro fare increase, it was the thunder of Molotov cocktails in the streets near our hotel.

Each by itself was profoundly impactful. Together, they teach an even bigger lesson!

For what brought some 200 people from across the world together in Santiago was motivated by the very un-sustainabilities these thunderous events portend: the unfolding climate and environmental crisis as much as the vast social injustices created by profit-driven, exploitative economic development. Both spring from long and complex entanglements of deep-seated driving forces, but in the end, it is nothing but gravity on a particularly warm day, or the last straw breaking the back that has carried the burden of economic hardship and irresponsive politics for far too long.

And Chile is just one such hotspot on our planet. World news today tells of protests in Beirut, Hong Kong, London, Bangladesh, Kashmir, Argentina, Croatia, and Spain; bombs are exploding in Syria and Afghanistan. The president of the once-stable powerhouse America may or may not be impeached, but in the shadows of that political showdown continue daily gun violence, persistent racism, environmental injustice, a growing climate movement, humanitarian atrocities against immigrants escaping economic depravity made worse by climate change, and the list goes on.

In fact, such lists go on in every country. The unacceptability of violence against humans and nature is coming to a boiling point. Yet in the quiet near-normal morning hours of downtown Santiago, among the spring flowers and birds in the high mountains of the Cordillera, in the friendly faces of an inspiring conference, we tend to forget how close we are to that thunderous eruption.

We must not! The kind of transformation needed now, a truly just and environmentally restorative transformation such as the Sustainable Development Goals and the Paris Agreement entail – that transformation will not come about because policy-makers sign an international agreement, or because someone invents a beautiful new, fix-it-all technology. Not even close. This transformation will come about – in fact, is already underway – because natural systems collapse, because people can’t take it anymore. Because limits – non-negotiable limits – have been reached, at which point we have to let go of the familiar and convenient, let go as well of entitlements and maybe illusions that we will transform our society in smooth and easy and peaceful ways.

Transformations of the scope and magnitude needed now begin with endings. With loss. With explosive eruptions over deprivations and injustices. They launch from the old ways no longer working, not from business as usual. We may wish for innovation and emergence of a beautiful new world, and visions of that better world are critically important as our North Star. But we must not lose sight of the powder keg of discontent on which we sit. Transformation is inevitably dangerous. For grievance to transform, it will take grief. We are in it now.

And that’s why what happened at Transformations 2019 is so important. We began to understand ourselves as a growing community, not yet inclusive of all the voices needed, but nonetheless a community growing in strength from the friendships we are forming; from the diversity of Northern and Southern, academic, NGO, private sector and government voices learning to hear each other; from the practices we use to hold spaces for engaging each other in sharing and sensemaking; and from the stories we carry, take apart and are beginning to rewrite.

And because we engage this transforming world, we realized how we are, in fact, becoming active players: relevant, solutions-oriented and useful. We saw that we are becoming aware of the responsibility this involvement entails. Ethics is ever more important in our work, even if what is “the right thing to do” and what is “right” is not always clear at all. We began to acknowledge – maybe more openly than ever before – that we do our work in epistemological and ontological, strategic, tactical and evaluative uncertainty. Inevitably so, maybe rightly so, demanding of us an unfamiliar level of humility in our work.

Maybe, at Transformations 2019, we became more courageous. Because actively engaging a transforming world, even if we are not bolstered by a sense of certainty or moral righteousness, confronts us with power. The powers that be, and our own, as well as any lack of power we may feel. It demands that we engage with the politics of what is, that we confront who we are – as researchers, activists, decision-makers, humans – and question how we dare to matter, who we want to be, and who we are becoming as the world itself changes.

At Transformations 2019, even before the unrest exploded, the urgency to act was palpable. Among the most concrete needs we articulated was that for building capacity – our own and that of others – to hold space for transformative dialogues about our collective futures. To connect across disciplines, sectors and differences, and support each other through this difficult time. In a world, where city squares, border regions and ocean basins, forests, fields and darkening skies are becoming “sacrifice zones”, we understood that every choice matters.

What we maybe didn’t realize, but understand today as the squares are burning, is that all these insights are not theoretical. They demand being lived every day, in the squares we already inhabit and return to, as well as those that await us tomorrow.

And if we did – that would be the loudest thunder yet echoing from Santiago and Transformations 2019.