Skip to content
Small-scale gold miners inspire each other 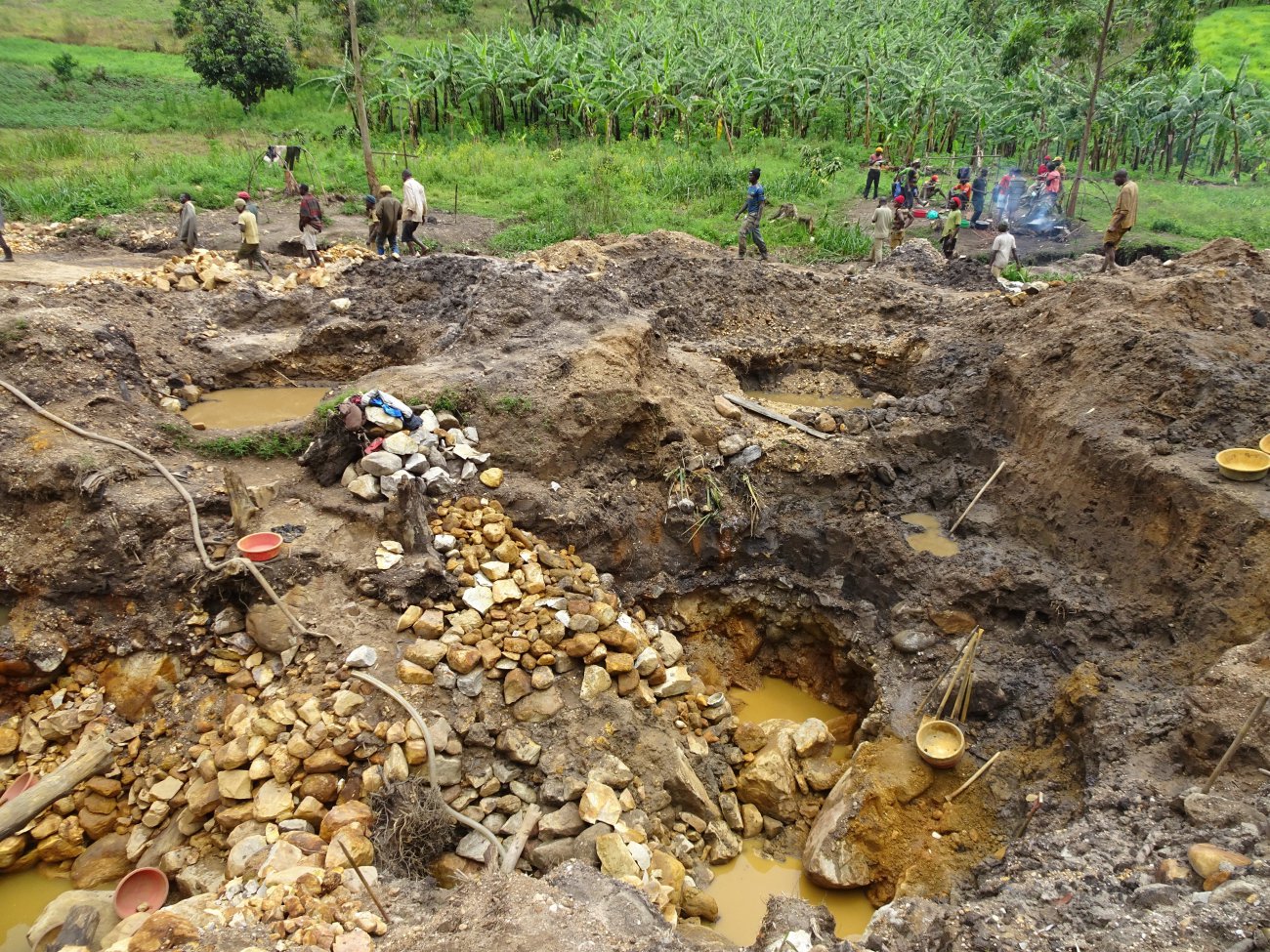 Illegally working with pans and mercury for a gram of gold? The international research programme Gold Matters adjusts and nuances this one-sided view policymakers have of small-scale gold miners. The programme focuses on conversations with the gold miners themselves: how do they see their future? This focus can lead to new perspectives on sustainability and ways of working. ‘Amazement is very productive.’

New insights come up when cultural anthropologists Sabine Luning, Marjo de Theije and Esther van de Camp talk about the gold miners they met in various African and South American countries. The typical neoliberal, large-scale gold mining in Africa and South America might be the dominant form of mining, but there are also at least sixteen million people worldwide who depend on small-scale gold mining. It is therefore hardly surprising that some researchers have specialised in the study of this way of life.

From panning to excavators

Or rather: ways of life. Gold miners in the rainforest of Suriname or Brazil work very differently from those in Ghana, Burkina Faso or Uganda. In the Sahel countries, there is often a lack of water to work with, whereas in the Amazon countries excavated pits often flood. Sabine Luning from Leiden University: ‘The conditions and techniques vary considerably, from panning for gold in creeks to using gigantic water hoses, or even excavators that open up the land to find gold ore that is subsequently grinded and processed into gold.’

Because large mining companies pay taxes and are checked for compliance with environmental rules, they have a better reputation with the IMF and the World Bank than small-scale gold miners. The latter often have a poor reputation, says Luning. ‘Governments frequently view small-scale gold miners as criminals, who work without the required permits and cause environmental damage. For example, the fact that mercury ends up in the food chain is definitely a problem. However, there are considerable differences in working methods. In Burkina Faso, for example, the government now recognises that large-scale, transnational mining excludes its own citizens too much.’

Aim of this research

In the research programme Gold Matters, nineteen researchers from countries including the Netherlands, Brazil, Burkina Faso, the United Kingdom and Sweden are collaborating with gold miners and artists in a transdisciplinary manner. The aim: visualising how mining takes place in the landscape and how that will influence the future of people and the natural environment.

Luning: ‘In January 2020, we jointly organised the first pop-up exhibition in a Ghanaian mining community.’

Such exhibitions lie at the heart of the research programme. The researchers want to inspire, for instance, miners in Brazil by showing them images of and stories from miners in Uganda. ‘Amazement is very productive,’ confirms Luning’s colleague Marjo de Theije, professor at VU Amsterdam. ‘One time I spent spent hours talking with Ghanaian gold miners about fifteen photos from Brazil because they had so many questions about these! For example, they saw the possibilities an excavator provides. The conversation was so rich! Even though they may live on the other side of the world, gold miners have something in common; they understand each other.’

The researchers also aim to reach out to policymakers through their exhibitions. Luning: ‘They often talk about these people rather than engaging in dialogues with them. Too often policy makers suffer from tunnel vision but do base their policy on this. They can make life more difficult for the gold miners, which is hard to justify.’ De Theije: ‘Gold miners in the Brazilian Amazon say: “People consider an undulating soya field beautiful. Yet far more trees need to be chopped down for that than for our work. We have no other possibilities. Either we do this work, or we become thugs”.

Burkina Faso and Ghana are two of the locations where Luning worked. ‘In the south of Ghana, gold miners use more technologies to process ore than in the north of the country and in Burkina Faso. Here, the grinding of the ore is not done by women but by grinding mills. Such technological innovation also causes tensions because the women loose the income they used to gain by grinding the ore.’ This is what the women and gold miners discussed with each other during a workshop: how do you balance income and health, what are the alternatives and who determines the ultimate direction of changes?

Another way of initiating important conversations is to jointly map the landscape and the mines. Luning: ‘We walk through the landscape together and discuss its characteristics, how different mining teams operate next to each other, but could also increase collaboration e.g. by jointly tackling water problems. We talk about what the land could look like in the future. That can lead to new ideas about sustainability.’

For her research, De Theije also visited various countries, including the rainforests of Suriname and Brazil. ‘Gold prospecting has a long tradition in the Amazon area. Men move through the forest from one gold site to another. If they are successful, then entire families join them, and lively communities can arise with shops, dance halls and cafes. Once the gold runs out, then all of that disappears again.’

In Suriname, De Theije once met a single mother from Brazil. ‘She had saved some money during her work as a cook in a mine and had started a little cafe. She maintained good relations with the gold miners. If they needed a good tractor driver, then she knew how to bring them into contact with somebody. In the end, some seventy family members of this woman were working in Suriname!’

De Theije witnessed the changes in work methods that occurred in Suriname. ‘Fifteen years ago, men dug a hole with a spade. Now they no longer do that, but use an excavator instead. That became profitable when the gold price surged and the oil price fell. It is fascinating to see how accurately they calculate the grams of gold which must be found for using one barrel of diesel, the price of which can amount to twenty grams of gold, for example.’

The researchers wanted to spread all of that knowledge and those stories among miners and policymakers, but the coronavirus crisis has seriously disrupted their plans. A case in point is Esther van de Camp, a PhD student from Leiden University, who had just initiated a new initiative when she was obliged to return home in March 2020 due to the corona crisis. ‘Gold miners were going to take photos of their work using second-hand cameras, and we were going to jointly create an exhibition for the local government and the many NGOs active there. The exhibition would also include photos from Brazil and Ghana as well.’

The researchers are now thinking of other, online ways of sharing their insightful and inspiring findings with gold miners and policymakers. That is a considerable task, but there is another challenge which should be mentioned. Van de Camp was fortunate: in total, she managed to do more than five months of field research in Uganda. During that time, she built up a good network and obtained a lot of information. However, her supervisor Luning observes that not all young researchers were so lucky. ‘Some PhDs and postdocs have not been able to complete their fieldwork and have to come up with a plan B with (too) little research material. The COVID crisis is a real disaster for young researchers who still need to build up their career and are now working at home, sometimes with young families.’

Did you know?
What should you look out for if you want to buy gold jewellery? Marjo de Theije, who wears beautiful earrings during the interview: ‘Many different standards have been developed for ethical, fair trade or fair mined gold for which people are better paid. The extra income generated is also used to help the community of mineworkers adopt cleaner technologies or establish a school, for example.’ In the Netherlands, Solidaridad is taking active steps to integrate social and ecological sustainability in the gold covenant between companies, governments and civil society organisations. On the producers’ side, they are working on improving the conditions in goldmines.

Find out more about Gold Matters: Sustainability Transformations in Gold Mining
Share:
By Rianne Lindhout
This blog was first posted on The NWO website, on 20/04/21