Skip to content
Migration and climate change in South Asia 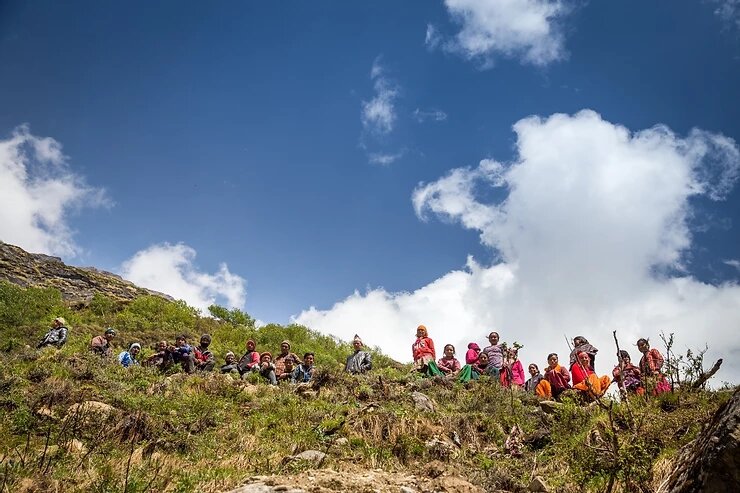 What happens when spatial diversification of livelihoods is not an option anymore?

Migration has long existed in South Asia. It has historically been central to the lives and livelihoods of individuals and households across the subcontinent. People have always moved – for employment and marriage, to avoid conflict and disasters, to meet personal aspirations, and to access opportunities. These movements, while individual and local, are also significant at regional and national scales. In India, internal migrants account for 37% of the country’s population, while in Nepal and Bangladesh, they account for 14% and 10% respectively as per Census 2011. The Labour Force Survey of Pakistan (2014–2015) estimates that around 13% of the country’s population are internal migrants. Significantly, internal migration is a key livelihood strategy across South Asia. It is estimated that remittances from internal migrants amounted to USD 10 billion in India (2007–08). In Bangladesh, data from the Household Income and Expenditure Survey (HIES) of 2010 estimated that about 12% of households received internal remittances.

While present-day migration across South Asia draws on multi-generational experiences, existing social networks, and past encounters in regular migration destinations, these patterns of movement are increasingly being mediated by ongoing climate change. In “climate hotspots” – locations where climate change impacts are well pronounced and well documented, such as the Himalayan region of South Asia, the deltaic regions in east India and Bangladesh, and semi-arid lands across Pakistan and southern India – people are increasingly adopting migration as a strategy to adapt to the environmental impacts associated with climate change and to deal with increasing risks.

Modelling exercises project that without any action, internal migrants in South Asia, currently estimated at over 40 million (or 1.8% of the region’s population), can increase to 25% or six-fold between 2020 and 2050. Such narratives of climate-induced migration are often criticized by different factions – for being alarmist on the one hand, and underplaying one of the largest challenges of a globalized world on the other. What, then, is the picture on the ground?

To assess what is driving migration and how it affects household incomes, wellbeing, and capacities to deal with climate change, we conducted a multi-country study across 21 locations in Pakistan, India, Nepal, and Bangladesh. Using empirical evidence across 9,440 migrant and non-migrant households, we examined the drivers and experiences of migration, exploring who migrate, where they migrate to, and towards what end.

We found that in climate-sensitive hotspots across South Asia, migration is an important way for people to diversify livelihoods and respond to multiple climatic and non-climatic risks. In the Sunderbans delta across east India and Bangladesh, for example, existing threats from extreme events such as cyclones intersect with non-climatic factors such as limited livelihood diversification opportunities to drive migration. In semi-arid areas in South India, increasingly erratic rainfall and prolonged drought, as well as shifting youth aspirations (away from farming) are driving young men to migrate to cities such as Bangalore and Mumbai. In the Himalaya, already precarious livelihoods are being exacerbated by extreme and erratic rainfall, forcing people to seek secure income sources outside the marginal mountains. In Pakistan’s semi-arid areas, floods, droughts, and heat waves are significant climatic risks that force people to migrate in order to build their ability to manage risks better back home. Empirical evidence suggests that most of this migration is internal.

Migration is also gendered. In our study locations, more men (83%) than women (17%) have migrated. The outcomes of migratory movement are mediated by gender. Women who moved as well as those who were left behind reported higher work burdens and reduced time for leisure. However, in some cases, such as in peri-urban Bangalore, migrant women reported improved well-being, with higher incomes translating to greater autonomy and bargaining power within households.

In climate change research, migration is often portrayed as an adaptation strategy – denoting that those with resources and networks can move out of risk-prone regions altogether or at least spatially diversify their livelihoods – and as such is taken as a successful mechanism with which to deal with climate change. However, the climate refugee discourse views migration as the last resort of the most vulnerable, tending to identify migrants as most exposed to climate change and with reduced capacity to adapt to risk. In our work across South Asia, we found that such binary views of migration do not fully realize the breadth of migrant experiences in the real world.

Our study found that remittances greatly improve households’ capacity to diversify income and move away from sectors exposed to climate change – such as farming and fishing. Remittances also insured families against a range of other environmental stressors, including droughts, floods, and landslides. However, when the most able bodied member of a family moves, those left behind find themselves in more vulnerable positions during times of hazard. Additionally, due to existing gender inequalities, an absence of male members in a household can adversely affect its capacity to adapt to climate change impacts. The outcomes of migration are therefore highly heterogeneous, and strongly influenced by who moves, what capacities they possess, and where they move to.

Falling between the cracks – migrants and the Covid-19 pandemic response

The COVID-19 pandemic has been particularly devastating for migrants across South Asia, with numerous reports of migrants losing jobs in destination cities that are under lockdown, being quarantined at borders and unable to return to their homes, and facing extreme food shortages as they fall through social safety nets. In India, migrants hit by a sudden and complete lockdown and unsure of where to look for food and shelter have died trying to cover hundreds of kilometres on foot. In a belated move, the government has taken steps to include migrant workers under social protection schemes. In Bangladesh, the task of supporting vulnerable migrants working in the country’s informal sector has fallen upon voluntary organizations with limited capacity to do so. Its financial stimulus package – announced by the Prime Minister to support export-oriented industries to fight the adverse impact of COVID-19 on the economy – does cover workers employed in the formal sector though, where internal migrants – mostly employed in garment factories – form the bulk of the workforce. In Nepal, the government’s advance announcement of planned closures of long-distance transport as a measure to mitigate the spread of the virus led to an exodus of internal migrant workers heading home. Those stranded in destinations were provided with food support by local authorities. Similarly in Pakistan relief was provided to daily wage workers, many of whom are migrant workers. In all cases, lack of data has been a major challenge in providing the needed support to the migrant workers. Thousands of migrant workers heading home to Nepal from India were stuck at border points for a long time before they could reach their home.

The Global Compact for Migration covers the needs and safety concerns of international migrants. However, internal migration, which is less visible, has not received as much policy attention at national and sub-national scales. This relative inattention has resulted in inadequate and conflicting data on the nature and number of internal migrants as well as the policies that include them.

While the COVID-19 pandemic has pushed urban dwellers to recognize the wide range of services migrants provide, it has also led to the stigmatization of migrants – both in cities, as they transit back home, and in their villages. Such stigma was blatantly played out when returning migrants were sprayed with disinfectants in the Indian state of Uttar Pradesh.

Climate hotspots across South Asia will continue to experience the adverse impacts of climate change alongside the current pandemic. In non-pandemic times, migration allowed vulnerable households to move, giving them a chance to diversity livelihoods and deal with climatic risks in their villages. However, the economic repercussions of COVID-19 are projected to shrink economies, curtail growth, and negatively impact sectors like manufacturing and transport that regularly absorb migrants. As the space for migrating shrinks, this key adaptation strategy will become unavailable to households, severely hindering remittances and their capacity to mitigate and manage external risks.

Building on our research, which highlights the importance of migration to a household’s livelihood portfolio, we expect that the absence of a major livelihood diversification option may severely curtail the adaptive capacities of already vulnerable populations. When people who usually migrate are forced to depend on local livelihoods that are extremely vulnerable to the impacts of climate change, the risk of increase in chronic poverty can rise in these climate hotspots.

As governments ease lockdowns and explore ways to boost economic growth, this potential of vulnerable people falling into chronic poverty and deprivation looms large. Internal migrants working in the informal sector of economies in South Asia are not easily covered by social protection measures put in place during the COVID-19 pandemic. These individuals and their families face destitution brought about by the loss of income over an uncertain period of time.

This article is also published by ICIMOD.

Ricardo Safra de Campos is a lecturer in Human Geography at the University of Exeter, United Kingdom. Chandni Singh is a researcher at the Indian Institute for Human Settlements, Bengaluru, India. Amina Maharjan is a Livelihoods Specialist on Migration for the International Centre for Integrated Mountain Development (ICIMOD), Nepal.

Find out more about Misty: Migration, Transformation and Sustainability
Share:
By Amina Maharjan, Ricardo Safra de Campos, Chandni Singh
This blog was first posted on the MISTY blog, on 13/08/20