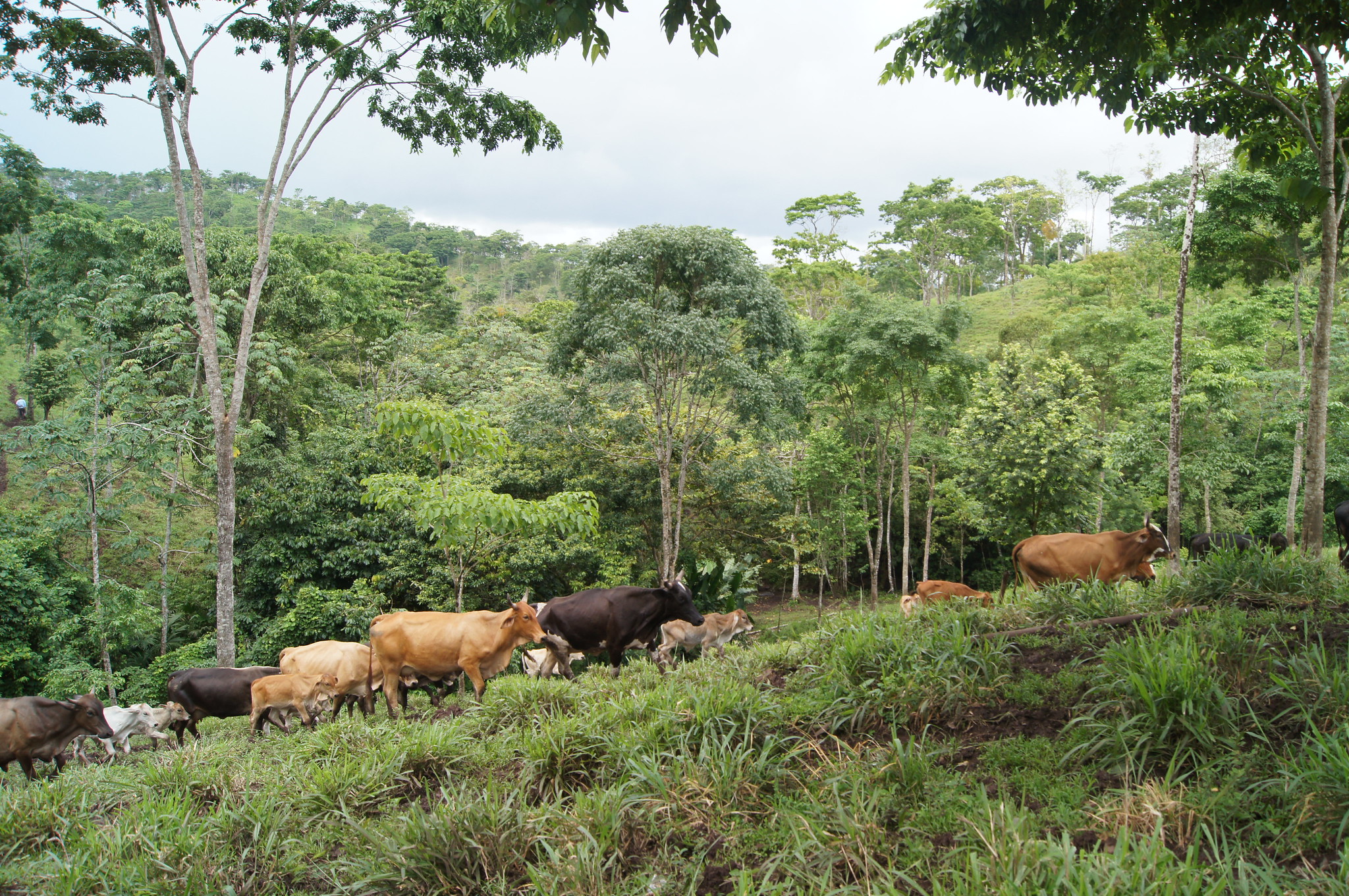 By Johan Bastiaensen. This blog originally appeared on the University of Antwerp Institute of Development Policy blog.

Given that our Nicaraguan academic partner institution, as part of the Grupo Fondo de Desarrollo Local/Nitlapán-UCA, was one of the three finalists, we attended the event with great expectations. The jury awarded the first place to an innovative index-based crop and livestock insurance initiative addressing the consequences of extreme weather events and pests. In itself, this initiative certainly constitutes a valuable financial instrument that can soften the impact of climate events on vulnerable small farmers in regions such as draught-prone North Kenya. Since the Press Release from the European Microfinance Week however rightly stresses that ‘(u)rgent action on climate change is needed’, we argue that such a financial instrument falls short of the type of action that is most needed and that this Award might send a mistaken signal about the way in which microfinance should and could contribute to such indeed very urgent action for the climate.

In the main foyer of the European Investment Bank (EIB) in Luxemburg, the award ceremony started with a speech by Dr Werner Hoyer, President of the EIB. Dr. Hoyer proudly announced that the EIB had understood the message from the European Youth and decided to commit at least 50% of new investments in the fight against climate change. The microfinance sector, Dr. Hoyer said, had also heard the “Not just credit, but innovation” message, and decided to reward promising innovations in this field.

The Indian scholar and environmental activist, Sunita Narain, then delivered a short but very strong keynote speech, a passionate call for urgent efforts to address climate change. Climate change is real and is now widely accepted as a fact, but few people seem to understand what it actually means: i.e. not a gradual linear change with increasing consequences, but rather a catastrophic and abrupt deterioration that will affect everyone on the planet, especially once we irreversibly cross critical tipping-points. She stressed that we should therefore not cultivate the illusion of simply adapting to climate change, but act quickly for a paradigmatic transformation of our current destructive, unsustainable productive activities and lifestyles. Narain argued that those who risk being affected first, and most, i.e. the poor in the South and especially rural workers and farmers, paradoxically also hold a key to restoration. The activation and strengthening of their diversified farming systems could indeed contribute to capture millions of tons of carbon, through capture by reforestation and rejuvenated soils (for similar arguments: see the ‘4 per 1000 initiative’), while also transforming socially unsustainable rural societies towards increased equity and livelihood security.

Paulette Lenert, Luxembourg’s Minister for Cooperation and Humanitarian Affairs, said that the Ministry’s Luxembourg Development Cooperation has been among the first movers in the finance ecosystem worldwide, and observed the importance of facilitating services that go beyond just credit to the poor. “The focus of a donor country should not just be on the credit, but on innovation” she said, including “business training, financial education and technical assistance”.

The activities submitted and presented for the Award by two of the three finalists focused much more on adaptation and damage control (for both clients and MFIs) than on structural transformation of productive and consumer frameworks. As for any insurance, the partially government-subsidized index-based crop and livestock insurance of the insurance company APA-Kenya is mainly a matter of sharing (a part of) the climate risk. ASKI-Philippines provides an articulated package of disaster-related services to increase client preparedness and post-disaster resilience, in particular related to the ever more frequent and severe typhoons.

Only the FDL/Nitlapán UCA group presented an initiative which moves more directly in the direction of transformative peasant-based on-farm reforestation and soil restoration, even when the green objectives were not necessarily prominent in the beginning of their activities. They presented their historical efforts to support and strengthen peasant production systems through an integrated Microfinance Plus package (credit, technical assistance, bio awards for ecosystem services) which is 80% self-financed from profits and partially subsidized by development assistance and innovative Payments for Ecosystem Services programs (see e.g. Proyecto CAMBio). For the Award, they argued that their support for diversified peasant-base production systems contributed to both the resilience of the clients and the ecosystems, i.e. to the restoration of local ecosystems through agroforestry and silvopastoral cattle and to the mitigation of planetary GHG-emissions by putting carbon back in soils and trees (as well as contributing to local biodiversity).

The choice of the High Jury of the European Microfinance Award in favor of the APA-Kenya insurance company as the most promising innovation in the field of strengthening the resilience to climate change matches well with the dominant agenda of financial inclusion, focused on bringing the financially excluded Southern poor into the realm of the global financial system. APA’s undoubtedly valuable and timely insurance service shares the risk of climate-related disasters affecting the vulnerable poor, thus also protecting the credit providers. However, it does not tackle underlying causes of climate change and people’s vulnerability to it. It helps to adapt to climate change, but it is clearly not aligned to Sunita Narain’s message in her keynote speech as it does not have ambitions in terms of structural transformation of the current inequitable development model and the restoration of the balance between humans and nature in order to help averting climate disaster.

In this way, it unfortunately appears in line with the current reduced social ambitions of financial inclusion, i.e. to help the poor to manage their vulnerability rather than to strive for the initial – and now largely discredited – promise to eradicate poverty and put it in a museum; a promise which prompted the international donor community to invest billions of dollars in the creation of the microfinance industry. We (and the planet) cannot afford a repetition of this experience.

The urgency and profoundness of the climate crisis begs serious thought about the spending of climate related international donor and investment funds. We argue that they should be used to sponsor transformative pathways out of the upcoming climate crisis rather than focusing mainly on insufficient bandaids to help some adapt to the worst of its consequences. Especially rural and agricultural microfinance institutions could play an important role in the transformation and restoration of the current socially distorted and ecologically disastrous agricultural model.

For this reason, we do not hide our disappointment that the FDL/Nitlapán UCA initiative was not selected as the recipient of the Award. Not that their initiatives are perfect or fully effective already; as they recognize themselves. We do think however that the FDL/Nitlapán-UCA emerging Green Microfinance Plus approach foretells a promising and more ambitious contribution to the required paradigmatic transformation and human-nature restoration. It is this belief that underlies our motivation  to write this blog: we wish to draw attention to what their approach offers in terms of the urgent action needed for the climate by the broader microfinance sector.

As we have amply discussed in our research about FDL’s initiatives (of which you can find some references here), microfinance alone cannot and should not pretend to make the difference. Indeed, ‘microfinance narcissism’ needs to be overcome in order to articulate finance with additional (educational, technical, business, legal) services and resources (targeted subsidies and payments for ecosystem services), enabled and sustained by sufficiently broad political coalitions and partnerships engaging in a real transformation of (agricultural) production and the restoration of nature.

The FDL/Nitlapan-UCA group has only been able to forge part of these necessary alliances; hence its limited impact up to date. Realization of those limits led to the creation of our current action-research project (Truepath) with the FDL/Nitlapán-UCA group, financed by the Transformation to Sustainability initiative of NORFACE and the Belmont Forum.

Through that joint project we are trying to achieve progress in articulating and strengthening actor-coalitions, linked to FDL/Nitlapán-UCA financial and non-financial service delivery, that could really transform the destructive development pathways in the Nicaraguan Agrarian Frontier, currently site of intense deforestation and encroachment of indigenous territories by extensive cattle ranching, while also being the target area of a new international REDD+ initiative. Similar initiatives should be promoted and researched elsewhere in order to generate experience and knowledge for the scaling-up and scaling-out of such transformative microfinance.

No more “business as usual”

We absolutely agree with Dr. Hoyer in his introduction to the Award Ceremony that climate change “is an existential threat for many nations and communities” and that “(h)ow we combat and adapt will shape our future.” We agree with the press release of the EMW conference that urgent action for the climate is indeed needed, but we also belief that – in line with the widely shared consensus in the Transformation to Sustainability literature – such action requires profound structural transformation, and not business as usual with some green corrections (see also our recent article in Current Opinion on Environmental Sustainability).

We therefore hope that the microfinance industry chooses to participate in the urgently needed transformative partnerships and finds ways to mobilize its own as well as additional, complementary funds and networks in order to make a more ambitious and transformative contribution. In the face of the emergency, we hope that it does not solely focus on financial opportunities but looks for ways to contribute to the structural changes that are needed. Merely contributing to make the climate disaster more manageable will not be enough.

As academics of the University of Antwerp, we have been partnering with the Fondo de Desarrollo Local/Nitlapan-UCA group (in particular with the research division of Nitlapan-UCA) to investigate the opportunities and pitfalls of FDL and microfinance in the transformation to social and environmental sustainability.  As independent researchers we do not speak for the FDL/Nitlapan-UCA.