Skip to content
From groundwater to coronavirus: local community responses in two villages in Algeria and Morocco

By Farah Hamamouche. This blog was originally posted on FLOWs on 14 May 2020.

The project “Transformations to Groundwater Sustainability” studies local grass-roots initiatives to protect and share groundwater in contexts of acute depletion and pollution. These practices are often spearheaded by marginal groups, thanks to a sense of territorial belonging and community identity. A similar spirit of solidarity has been activated to face Covid19 in two villages in Algeria and Morocco. Farah Hamamouche and Amine Saidani illustrate how women and youth played a key role in energizing these forms of care, often outside the formal economy.

From the appearance of the first cases of Covid 19 in Algeria and Morocco, the authorities have progressively taken measures to counter its spread. At different times, the two States i) promulgated a ban of all kinds of gatherings, including scientific, cultural, social, and political meetings, fairs and exhibitions; ii) closed nurseries, schools, high schools and universities; iii) ordered the closure of all mosques and places of worship and the suspension of all collective prayers until further notice; iv) suspended public and private means of public transport within cities and between cities and districts for non-essential activities, as well as rail and air traffic; v) applied a total or partial confinement of families; vi) ordered the cessation of secondary economic activities, considered not essential, such as cafes and restaurants; vii) ordered the demobilization of certain employees while maintaining their wages, in particular those caring for children; and viii) created a national corona virus fund.

In parallel to these measures taken by authorities, the village communities are doing their part of the job as well. We chose two communities in remote rural areas in Algeria and Morocco to illustrate the resilience of village communities. Surely, rural communities in North Africa are known for collective action around natural resources, such as water, forest and land, and for their solidarity. What is interesting in these cases, is the role of youngsters and women in the fight against Covid19. In this post, we want to draw attention to this highly gendered organization of civil society.

Ait Lahbib is a village situated in the Moroccan Sahara in Alnif municipality at 650 km from Rabat. This region is famous for the traditional oasis agriculture (palm trees associated with fruit trees and annual crops) and by the new agricultural landscapes oriented towards watermelon.

The village of Boudjellil is situated in the Kabylia mountainous region near Bejaïa at 160 km from Algiers. This region is famous for family agriculture, especially olive trees and poultry farming.

On the basis of testimonies collected by phone and earlier observations and exchanges in Ait Lahbib village by one of the authors, as well as the direct observations and exchanges by the other author who is confined to his native village, we noticed how the young people and women of these two villages played a key role in organizing all kinds of activities in response to the pandemic. Despite their spatial distance and even though there is no link between the two villages, in both villages young people have concentrated their efforts around four fronts: protection, security, food supply and awareness raising. In collaboration with the competent authorities, the civil society in both villages coordinates all kinds of actions

Ait Lahbib: the role of the local association “Afaq”

Since March, the members of the Afaq association launched an awareness campaign for the population about the coronavirus in three languages (Berber, Arabic and French). This campaign lasted 15 days and involved 80 villages in the Alnif municipality. It focused on informing people about the danger of the coronavirus and the need to stay at home to avoid its spread, while reassuring the population that the association will be there to help and support them. The members of the Afaq association also advised the population to respect social distancing when people go out in order to exercise essential activities such as agriculture and livestock rearing.

In parallel, a French association, Leila and Nawelle, alerted the Afaq association about the absolute necessity to orient the activities of their workshop, which brings together women seamstresses of Ait Lahbib’s village, towards the making of washable alternative masks in fabrics. Before the temporary suspension of connections between France and Morocco, the Leila and Nawelle association had sent them models of alternative masks in fabrics produced in France by small companies and associations.  The objective was that the women in the Ait Lahbib workshop could get inspired by these masks, while also informing them of the precise standards to be met. The women of Ait Lahbib manufactured between 100 and 200 masks in washable and reusable fabrics per day in three different sizes. According to the male members of the Afaq association, these masks were distributed to the general public and targeted officials (local population, gendarmes and police, administrative staff, etc.).

At the level of the three entrances to the municipality of Alnif, road blocks to allow screening those who enter the municipality have been installed in collaboration with the competent authorities. Passers-by must have a pass. Otherwise, the drivers of the vehicle risks being imprisoned.

This vigilance is strict, because the coronavirus coincides with the harvesting period of the watermelon. Semi-trailers and trucks come from all over Morocco to get their supplies. Faced with this traffic, the Afaq association in collaboration with local engineers have designed and constructed an artisanal disinfector of transport vehicles. They installed the disinfector at the intersection of two main roads (N12 and R113).

Six young volunteers joined this cause by cleaning and disinfecting public spaces, food stores, banks and post offices and administration offices using backpack sprayers. The material was donated by the competent authorities. The Afaq association coordinated this action, which concerned the city of Alnif and several surrounding villages.

In order to encourage Ait Lahbib’s population to stay at home, the Afaq association also took care of grocery shopping. A phone number has been set up for families so that they can send their shopping lists by message. The association asked a villager owning a tricycle vehicle to deliver the groceries to the families.

For the most disadvantaged, Afaq association launched a call on its Facebook page to collect money from local benefactors, but also from natives living abroad who sent money through Western Union. Baskets equivalent to 250 Dirham (around 23 Euro) in food, were distributed to 170 families in four neighboring villages. Another campaign is also planned soon for 150 family beneficiaries. Before the distribution, surveys were carried out by the association to determine the families most in need. 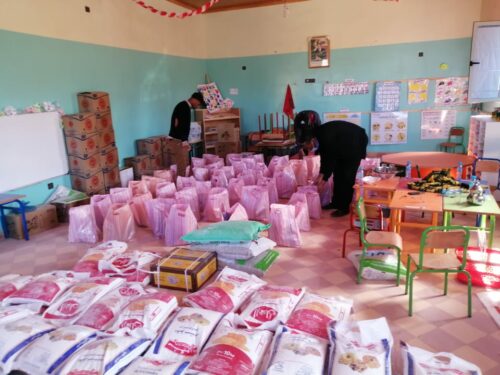 Food distribution campaign for the most disadvantaged (source: Mostafa ACHELOUAW)

The role of local associations in the village of Boudjellil

After being confined in Algiers for a few days, and seeing the containment measures strengthened, Amine Saidani – one of the authors of this post – decided to join the family home in the Kabylia region (Béjaia), more precisely in the village of Boudjellil. This is part of the municipality of the same name with 16 other villages. It is located in the Sahel valley, in the southern Djurdjura at the extreme southwest of the administrative district of Bejaïa. In this district, the first appearance of the Coronavirus dates back to March 18, 2020. Officially until April 18, 97 peoples were affected among which 13 people died. In our town, even if so far no case has been identified, the civil society and local associations got organized to avoid the spread of Covid19.

The collective of villagers and associations raised awareness at the level of the filtering barrage, and among the elderly, also in the other villages, to explain the precautions to be taken to avoid being infected. The filtering barrage consists in controlling all those who enter in the village and making them aware of the local measures to respect. In addition, the cars are disinfected at this level to avoid the introduction of Covid19. This initiative is carried out by young people who take turns.

The Assirem association for women promotion of Boudjellil makes washable bibs and protective masks. They sew either on the premises of the association or at home.

The members of the Assirem association pass through all the houses of the village to distribute these protections. They also distributed them to the young people who take care of the disinfection, to surrounding villages, care center and to the gendarmes.

In addition to all this mutual assistance, a small local business specializing in the production of essential oils and soaps, wanted to start producing hydro alcoholic gel. Yet, due to the lack of surgical alcohol in sufficient quantity, they started to produce a natural antiseptic soap instead.

In addition to containment measures by local authorities, the villagers in coordination with three local associations active in the field of sport, culture and the promotion of the women started with the disinfection of all the districts, post offices and town halls, with chlorinated water in automatic backpack sprayers. They received the help of the national gendarmerie, who put at their disposal a truck equipped for this kind of intervention.

Thereafter, three of the four accesses to the village were blocked, while the remaining access was equipped with a sort of disinfectant tunnel for cars. Young volunteers from the village took over so that all cars entering the village are disinfected, while also measuring the temperature of all occupants of the cars.

There were shortages of certain essential food supplies in certain localities, due to the rush of consumers in purchasing items such as semolina and flour. A group of villagers organized themselves by going from house to house to list the semolina requirements of each household. Each house paid for its semolina in advance and a truck was made available for the purchase of semolina which was delivered for each home three days later. These actions are funded by charitable souls in the villages of the region.

A fortuitous visit to a private school in the village; empty because of the confinement, which usually gives support classes to college and high school students, allowed us to launch a small idea, inspired by meetings between researchers, during confinement. We proposed to the school manager to resume these support courses by teleconference so as not to penalize the students, especially those who are in exam classes (bac and certificate). The Director really liked the idea, Currently he is contacting the concerned students to make sure that everyone can get a computer to connect, hoping that the idea will materialize

It is amazing to see the similarities between the two villages in two different countries and in two different climatic contexts. The common situation in North Africa’s hinterland, in mountainous and oasis context respectively, far away from the main cities can explain this similarity in gender organization and actions implemented. These communities are known for collective action around natural resources and solidarity.

The success of these two villages in countering Covid19 may prompt people to think about such an organization to deal locally with the pandemic.