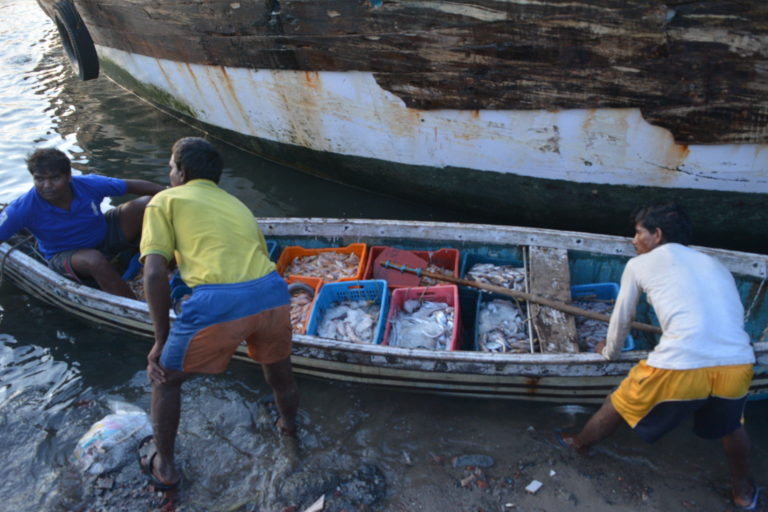 By Synne Movik and Hans Nicolai Adam. This blog originally appeared on the TAPESTRY project website.

The coastal mega-city of Mumbai is a vibrant bustling hub, home to some 20 million people and a magnet for migrants who flock to the city seeking new opportunities and a better life. The city is a complex conglomerate of contrasts; with modern high-rises and shopping malls jostling for space with slums, wealth and glamour exist cheek by jowl with poverty and deprivation. The city also has a unique ecological identity, encompassing extensive areas of mangroves, wetlands, and salt pans that function as green lungs and buffers against floods, to which this low-lying coastal city increasingly is prone.

While the city is a cosmopolitan melting pot, some of its early settlers, the Koli fisherfolk, trace their ancestral roots in this region back more than four centuries, when Mumbai was not much more than an assemblage of seven islands. Land reclamation has since forged a single landmass out of these islands, forming the foundations for the contemporary urban construct. Squeezed in between the high-rises and thoroughfares are the fishing villages, or koliwadas.  These villages make up an incongruous patchwork of low old-styled houses surrounded by the high-paced hum of modern urban life. These areas comprise some of the prime plots in the city, eagerly sought after by land-hungry developers.

The Koli fisherfolk rely on their access to and relationship with these lands and adjacent coastal areas to support the centuries-old practices of traditional fishing in small boats. These traditions are being increasingly marginalised through competition from large commercial trawlers, pollution levels, climate change-related uncertainties, and urbanisation. The Koli’s practices and livelihoods still form an important part of Koli identity[i]. Despite the uncertainty surrounding future prospects, they take pride in their ancestry, cultural heritage, and their claimed status as the city’s original inhabitants.

Rights to land and coastal areas: a long and ongoing struggle for traditional fishing communities

In 1963, a circular based on an extract from 1771, from the time of Portuguese settlement and colonisation, noted that priority should be given to Koli communities for fisheries-related activities. However, over time, this priority and initial formal recognition has been watered down. Rather than being prioritised, Kolis have been increasingly deprived, having to give up land and resources for the sake of the ‘public good’ and to meet the needs of urbanisation, to make space and give up land and access to resources. They also have to heed an increasingly voluble discourse of the ‘blue economy’ with its emphasis on profitable extraction and development of marine and coastal resources.

There was some hopeful change in 2011, with the Coastal Regulation Zone (CRZ) notification strengthening the protection of fragile ecosystems, koliwadas and fishing communities along the coast. The notification prohibited reclamation and development activities in these ecologically fragile areas.  The Koli communities in Mumbai welcomed this recognition. However, subsequent amendments eroded these gains, relaxing restrictions on development activities and making it easier for development in coastal areas to proceed unhindered.

A fundamental challenge is that the Kolis’ rights to the land and sea areas, upon which they depend, have not been formally recognised. However, this is now changing. The Kolis along the Mumbai coast were growing anxious about their community land and coastal areas, habitually labelled as ‘slums’ in the city planning maps. They demanded that their community lands be demarcated, mapped, and recognised as ‘CRZ III areas‘ (i.e. suitable only for low-intensity development).

In 2018, the process of demarcation began with a survey of all the fishing settlements, which was done by the Fisheries Department, the Revenue Department and the Collector’s Office in collaboration with prominent Koli representatives and union leaders Ujwala Patil and Madhuri Shivkar, who are working tirelessly to raise awareness in the Koli community on this issue. As part of their activities, they encourage the formation of associations in the koliwadas to coordinate and mobilise around the demarcation process.

The perils of large-scale infrastructure projects: who decides and who benefits?

These mobilisation and demarcation efforts are highly necessary because the Kolis face further threats to already fraught livelihoods from several large-scale infrastructure projects, which the government continues to press on with. For example, the Shivaji statue project, an enormous 212-metre monument to commemorate the 17th-century warrior king, would occupy an area of 130,000 square-metres on the coastline on one of Mumbai’s popular public beaches, threatening several Koli villages.

While some Kolis are not necessarily opposed to the idea of commemorating Shivaji as such, they object to the process and choice of location. What they demand are fair processes, access to information, the ability to participate and influence decision-making, and adequate compensation in cases where they are bearing the brunt of negative impacts. Meanwhile, plans for the Shivaji statue are being pursued relentlessly. The project would have major consequences for local currents and tides, causing ecological damage and impacting on the fisherfolk’s ability to access fishing ground.

Another example is the Mumbai Coastal Road project, an eight-lane, 29.2 km road to the tune of US$1.7 billion, which would run along the western shoreline and link the northern and southern parts of Mumbai.[ii] As critics have pointed out, it will have severe negative social and ecological impacts on artisanal fishing in the coastal zone.  Moreover, the plan goes against the grain of what is needed for more sustainable transport in the city, as it in effect caters to private vehicles, rather than pursuing more sustainable pathways to mitigating urban congestion through boosting public transport systems.

Concerned citizens and civic groups filed a number of petitions against the Coastal Road project. This included a petition filed by the Collective for Spatial Alternatives, a group of urban designers, architects and planners who work closely with the Koli communities, and who speak up for their interests. The affected Koli communities are mobilising against these projects, organising meetings with project representatives and allying themselves with lawyers that are sympathetic to their cause.

As a result of the petitions, the Mumbai High Court ordered in April 2019 that the Coastal Road project be stayed, stating that the proposed land reclamation was illegal. However, the Supreme Court later lifted the stay, and gave the contractors permission to start reclaiming land. Although permission to start the project itself was not provided, the court has scheduled the next hearing for the coastal road case in April, while reclamation continues, causing severe destruction on Mumbai’s coastal areas. The mangroves along the coast of Mumbai are buffers against flood tides and important breeding habitats for a diversity of fish species. Their disappearance has caused a severe drop in fish catches, according to representatives for local fishing co-operatives.

Social transformation and the ongoing struggles for reclaiming space

While the fisherfolks’ lives are being transformed as they adapt to changing pressures, moving from traditional ways of life into new occupations, there is another kind of transformation going on. The communities themselves are relying on their own agency and capacity to rally around a common cause based on shared notions of culture and identity. A diverse set of affected koliwadas have come together to oppose the Bandra-to-Versova stretch of the Coastal Road project. As one representative explained, it was the first time they had been united in a common cause.

The koliwada communities often have disparate interests and there are diverse political allegiances that can prove difficult to navigate for fostering collective action. However, in this case, these differences and divergences are being dealt with in recognition of the need to unite to protect more overarching common interests. Such actions are important from the point of view of the communities themselves and in relation to the long-term effects of climate change, where current planning practices are falling short of the need to understand the importance of ecological elements in their spatial planning practices.

Thus, the Kolis’ effort to reclaim space is also an important element in preserving the long-term sustainability of the city itself. Their community spaces serve to protect mangroves and mitigate the effects of climate change, conserving sensitive ecological areas which act as buffers against the potentially devastating impacts of climate change and sea-level rise. The social transformation that is needed to make Mumbai more sustainable thus hinges on these grassroots mobilisations and actions to reclaim space – geographically, politically and discursively.

[i] Although, many of the younger generation are moving into other occupations, as fishing is on the decline.
[ii] The Coastal Road project was first proposed in 2011 by the then Chief Minister of Maharashtra, and the Maharashtra State Road Development Corporation (MSRDC) was tasked with following up on plans. The argument was that the project was a necessary means to de-congest the notoriously jam-packed traffic of Mumbai. Moreover, the Maharashtra Coastal Zone Management Authority claimed, somewhat implausibly, that the road would serve as a protection against flooding. The project, which would require an area of 1 .68 km2 of land reclaimed from the sea, got a green light in 2017, and construction began in October the following year.