Skip to content
Citizen-generated data for flood resilience in Brazil 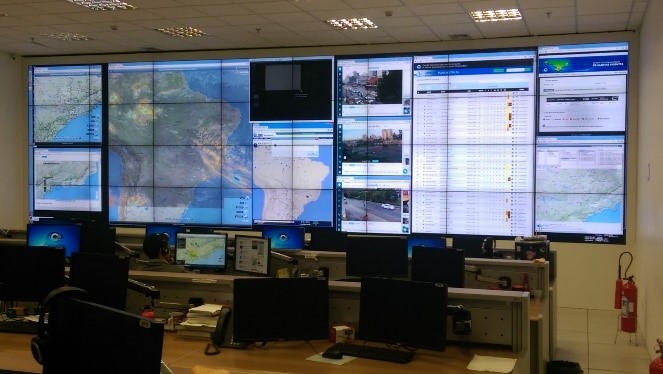 We spoke to João Porto de Albuquerque of the University of Warwick, UK, about how the Waterproofing Data project is tapping into local knowledge to get a better picture of flood resilience in different communities in Brazil.

In the control room of the Brazilian Centre for Monitoring and Early Warning of Natural Disasters (Cemaden) in São Jose dos Campos, a team of analysts monitor a video wall displaying data and images of hydrological, meteorological and climate conditions from all around the country.

The various flows of data streaming into the video wall come from rainfall gauges, humidity sensors, weather radars, hydrological stations and other monitoring equipment all over Brazil, painting a textured picture of environmental variability and potential hazards across the country.

As a country with unique river networks and diverse climatic conditions, natural hazards in Brazil tend to arise from having too much or too little water, with droughts, flooding and resulting landslides all predicted to increase over the next century. At the same time, rapid urban growth of the past 50 years means that a large number of people are settling on the fringes of Brazil’s megacities, including in flood-prone areas. That’s what makes monitoring centres so crucial: when the rainfall pattern appears out of the ordinary, the decision to issue an alert about a potential flash flood can make the difference between survival and destruction for vulnerable communities. However, a changing climate and continual urban expansion mean that decision-making scenarios based on flood mapping can quickly become outdated, putting increasing numbers of people at risk.

While Cemaden is at the forefront of hazard monitoring in Brazil, the ability to make accurate forecasts depends on individual experience and on what data is available. In a country as vast as Brazil, data coverage can vary greatly. In addition, occasional hiccups with monitoring equipment, such as a broken rainfall gauge – something that’s all the more likely in a disaster situation – can mean disaster analysts have to make vital decisions on the basis of limited information.

It’s extremely difficult to forecast how a specific community might be affected by exceptionally heavy rainfall and flooding. Making accurate projections demands a granular understanding of the community at risk, its coping capacities and the attributes or practices that might make it more or less resilient – information which is in short supply. One way of gaining a deeper perspective on local resilience is by tapping into the knowledge of people with real understanding of each area: members of the local communities themselves. This is the task that the Waterproofing Data research team have set themselves:

“We have a new understanding that it’s not enough to have this engineering and expert management of flooding, we have actually to include the people” said João Porto de Albuquerque, who’s leading the project.

The research team is working with communities in two very different areas. In M’Boi Mirim, a neighbourhood in the southwest area of São Paulo, a lack of essential infrastructure and deep urban poverty can be found a stone’s throw from highly developed residential areas. With around 600,000 inhabitants, M’Boi Mirim is a city within a megacity. A combination of seasonal heavy downpours and proximity to the Embu-Mirim River mean that it’s subject to frequent flash floods.

The second study area is Rio Branco, a city of around 300,000 inhabitants in the Acre river valley in northern Brazil (State of Acre), surrounded by the Amazon forest, not far from the border with Peru and Bolivia. When the Acre floods, areas of Rio Branco can be left underwater for weeks at a time. In early 2015, the level of the Acre River reached a record 18.40 metres – some four metres above the official flood level – displacing thousands of inhabitants.

Photos from the 2015 floods in Rio Branco

The different types of flooding in each study area have very different temporalities, but the flood protection agencies in the two cities face similar problems. By comparing Rio Branco and M’Boi Mirim, João and his colleagues can explore the way city-level flood management systems interact with individual communities and look for commonalities and differences.

By working with the communities themselves, they’re tapping into generations of knowledge on localized flooding and how to cope with it. The team are trialling different initiatives to connect with different groups of citizens, in what is strictly a learning process for both sides – João stresses that in order to build trust and empower community members, there’s always room for new ideas about how to crowdsource and visualize community knowledge to emerge. The aim is to find ways of working that resonate with the community members themselves, so that they become active members of the project rather than just passive research subjects.

One method that seems to work particularly well with older generations is collecting ‘digital memories’ of flooding. These might take the form of a recording of one of their stories from a past flood, a collection of images of local flooding and its after-effects, or sketching over a map the most affected areas by previous flooding events.

At the same time, local children have turned into citizen scientists, using hand-made rainfall gauges to monitor precipitation around their schools, and making hand-drawn maps of their areas. It’s hoped that this will inspire the younger generations to learn about local flooding and gain practical experience of data collection. Once the flood memories, rainfall gauges and other types of data have been collected, they will be curated into a web portal and an art installation that makes the knowledge and data tangible for all to explore. The team have also connected with an existing initiative to collect data via a mobile phone app, and are redesigning the app around the needs of the communities themselves.

With new types of data being collected at the local level, the next challenge for the project will be to integrate citizen-generated data with data collected using traditional tools, in ways that help the communities, the flood analysts and policy makers take important decisions on flood management. When combined with work to process existing and new data into standardized datasets about flood hazards and vulnerability, and to make available high-quality geospatial data, it’s hoped that the project will transform how flood-related data is produced, shared and used. Ultimately, the aim is to increase resilience to flooding in vulnerable communities in Brazil. Involving community members, as the team are doing in M’Boi Mirim and Rio Branco, promises to not only build more comprehensive knowledge on flooding, but to co-create lasting solutions for the communities themselves.