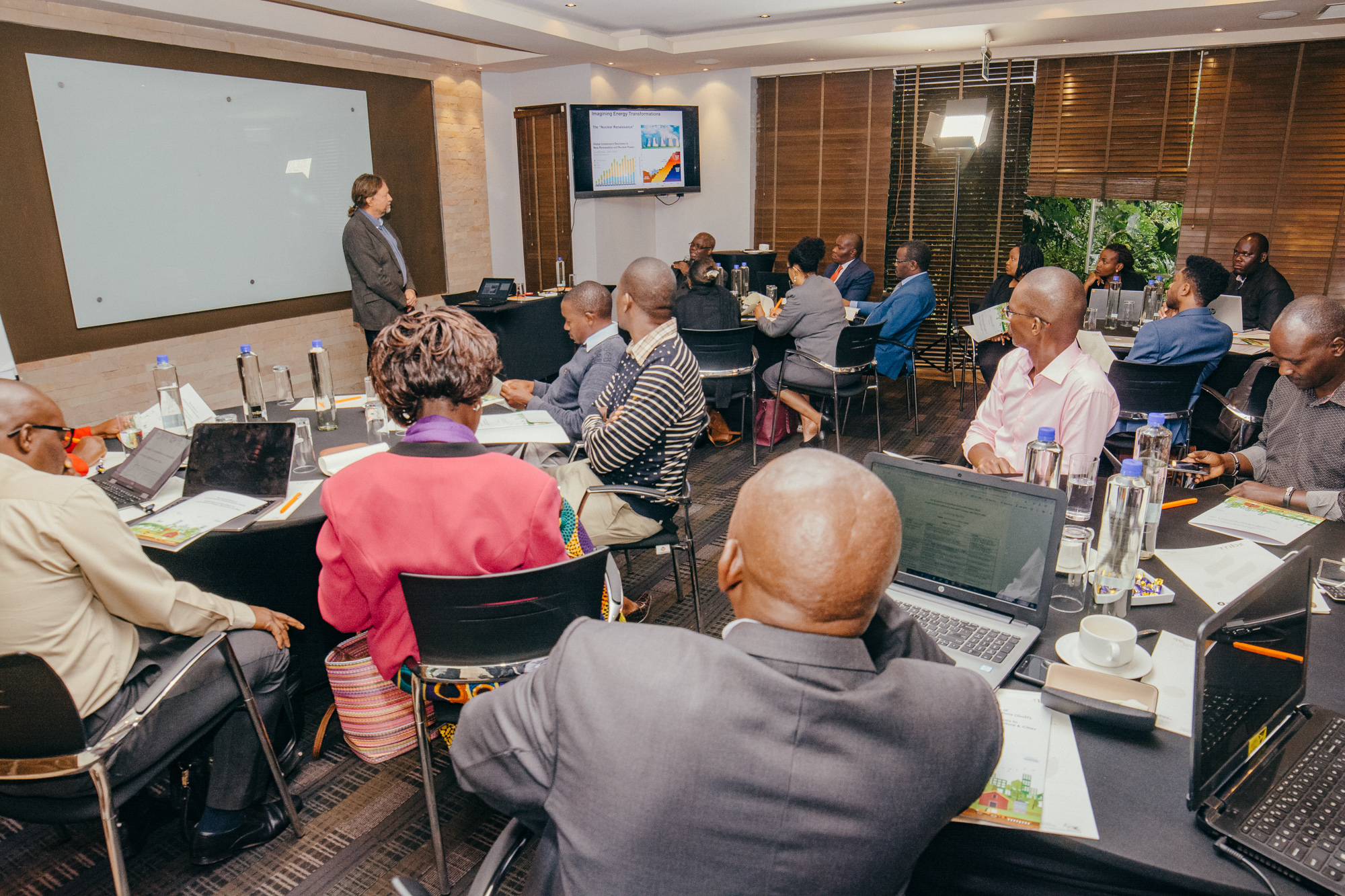 By Andy Stirling. This blog originally appeared on the GoST project website.

This is the second in a three-part series of blogposts reflecting on discussions at a great workshop in October 2019, convened in Nairobi by the Africa Sustainability Hub of the African Centre for Technology Studies. Drawing on work undertaken in the wider ‘Governance of Socio-technical Transformations’ (GOST) project, one key idea that helped frame and motivate these discussions was the notion of the ‘socio-technical imaginary’.

At root, this idea involves attention to contending imaginations of possible futures, as grounded in diverse understandings and perspectives on relevant histories and features of the present world. Such an approach can fulfil a crucial practical role in enabling more robust and reflective deliberation over the nature of momentous changes currently underway in cities, agriculture and energy.

This focus on future imaginaries addresses the crucial (but often neglected) truism, that expectations over what is likely can (no matter how realistic) often be the most formative influence on the kinds of change that actually take place. There are many reasons for this. One, lies in the behaviour of capital markets. If powerful investors see things moving a particular way, then investments in this direction of change will appear to present ‘lower risk’. Resulting cheaper finance for the necessary infrastructures, then in turn reinforces exactly the kinds of change these privileged groups imagine.

By stepping back from the immediate intensity of clashing interests and values, balanced attention across a diversity of contrasting imaginations of possible transformations also allows an important political benefit. It can help defuse otherwise hotly-adversarial discussions and foster instead more common ground in exploring the implications of varied worldviews – and at least agreeing what is disagreed. In this way, more accountable debate and more rigorous analysis may become possible over the multiple possible directions for different prospective ‘sustainability transformations’.

But why is this important? Doesn’t the highlighting of ‘imaginations’ over ‘facts’ help fuel the currently dangerous worldwide trend towards a ‘post-truth’ politics, in which too much attention is given to unrealistic or unsavoury visions, and too little respect paid to the value of expertise? Isn’t this growing global pathology one of the main threats to achieving transformations to sustainability?

Perhaps in some ways. But there are also other ways in which the neglect of conventional ‘evidence based’ policy for the importance of contending underlying imaginations, is arguably a major driver of exactly these regressive forces. This can be seen in current struggles for the soul of sustainability discourse itself – as a means to ‘close down’ or ‘open up’ space for wider politics.

Seeking to intensify the existing forms of closure around ‘independent expertise’, ‘sound scientific regulation’ and ‘pro-innovation strategies’, many contemporary broadly ‘sustainability-branded’ initiatives have the effect of closing down attention and action around apparently simple single ostensibly urgent, certain and ‘non-negotiable’ technical and expert-led imperatives. Rather than open unstructured arenas of politics, this is about the far narrower corridors of ‘policy making’. Here, a clamouring array of over-entitled actors loudly assert a variety of favoured means to closure.

Addressing the inconvenient plurality (and political accessibility) of what the Economist called ‘the stupid development goals’, this technocratic backlash takes many forms. But noisy clamours around ‘grand challenges’, ‘planetary boundaries’, ‘green growth’, ‘the nexus’, ‘responsible innovation’, ‘sustainability science’, or the (so-called) ‘anthropocene’ all hold one thing in common. Each substitutes vertical, instrumentalised, controlling (and potentially controllable) expert-led technical ‘policy’, for the more open, horizontal, caring (and explicitly social) spirit of sustainability ‘politics’.

Far from countering current worldwide trends towards authoritarian populism, the overbearing hubris and excluding elitism of these aspiring reframings of sustainability, may actually help to exacerbate the ‘post-truth’ rejection of science. By downplaying the uncertainties and ambiguities inherent in science and overclaiming the legitimate role for expertise, these globalising moves can actually be seen as part of the provocation towards which authoritarian populism is a response.

In this light, the irreducible plurality, clear social focus and explicitly political ‘imaginary’ of the SDGs has much to offer. It authentically reflects the values of the emancipatory political movements which drove sustainability in the first place onto the ‘agendas’ of elite global academia, policy and business. And it also arguably helps to defuse some of the deepest drivers of the currently toxic global trends towards authoritarian populism that form such a grave obstacle to sustainability of any kind.

So, what then in the light of the Nairobi workshop, might be some answers to the queries posed in the last blog-post. How, for instance, might it be possible to imagine progressive transformations to sustainability in ways that counter these many perverse forces in the world? Here there can be no pretence at any single final answer. And the research of the GOST project itself is still at an early stage. But, for what it is worth, the Nairobi discussions did inspire me to make at least some effort.

To start by characterising ‘social transformation’ of any kind, then, this must obviously (to live up to the use of the word ‘transformation’) contrast with other kinds of incremental, superficial or short-lived change? So some kinds or aspects of qualities immediately seem implied of ‘depth’ (in structural implications), ‘radicality’ (in the pace of change), ‘pervasiveness’ (in the scope of what is affected) and at least some level of ‘durability’ (in long-run historical salience)?

But this describes transformation of any kind – good or bad. Despite the essential normative diversity and political openness emphasised here of the most progressive imaginations of sustainability, these do still impose important normative bounds on what might legitimately be thought of as a ‘transformation to sustainability’. However construed, radical improvements are implied in crucial qualities of social equality, human wellbeing and ecological integrity.

It is in this light that the Nairobi discussions suggest to me, a shared imagination of ‘transformations to sustainability’ as “deep, radical, pervasive and durable shifts towards a diversity of politics in which social equality, human wellbeing and ecological integrity are continuously improving”.

But just as scope for scepticism and dissent is central to sustainability movements, so too must this be for any aspiring formulation of their associated political meanings. And here again, the Nairobi discussions suggested a number of important caveats, provisos and directions for onward questions.

First, as workshop participants clearly pointed out, “nothing is permanent”. If Sustainability is to remain progressive and not succumb to conservative visions of supposed status quo stability (like ‘planetary boundaries’) then, it must itself be recognised as intrinsically dynamic (as well as diverse) in nature. Sustainability is in this sense not an endpoint, but a continuing process, of transformation.

Second, there is another insight raised by the Nairobi participants with regard to the conveniently orderly nature of the ‘transition’ processes, in the imaginations of typical elite policy actors. Just like conventional development, innovation or dissemination processes, these are conventionally imagined as well-behaved ‘logistic curves’, described by neatly steadily-rising lines on a graph.

But – as was pointed out – some of the most momentous transformations can often occur in alarmingly oscillating ways. This is the case in many physical mechanisms, for instance, where materials change their phase under shifting ambient conditions. It can also be true of many political processes, where ‘events’ can swing drastically between poles until some other axis for change emerges. Perhaps a label for this proviso might be that “everything important happens in waves”?

Either way, to the extent this is true, then perhaps some of the more disturbing immediate swings in the present world towards nationalism, inequality and war, may yet be viewed without despair? If sustainability politics are enacted in democratic (rather than technocratic) ways, perhaps it is the underlying tide of history that might be held to be at stake, rather than these ephemeral waves?

Finally, there follows for me another consequence of the radical plurality and multidimensionality that Sustainability crucially brings – as emphasised in the Nairobi discussions – to debates about transformation. No matter how ambitious it might be, it is surely not the case that any social transformation necessarily involves an imagination that it is everything that is changing?

For most kinds of real-world process of political pressure to work, after all, there is surely a need for load-bearing pivots, ratchets and fulcra against which for change to brace? But if so, then such practical needs for radical shifts in some dimensions and fixity in others, may point to something of a paradox: “in order to be politically achievable, what transforms must tilt on what remains solid”.

If so then there may emerge here from the Nairobi GOST project workshop, a final query of real importance for achieving ‘transformations to sustainability’. If what is to be transformed in these prospective processes are the prevailing conditions of human wellbeing, social equality and ecological integrity, then what is it that must remain solid? Without attending to this, the risk is amplified that imaginaries of transformation will remain confined more to discourse than action.

For reasons I will unpack further in the next blog, the Nairobi discussions did help me at least, towards my own tentative and provisional answer to this question. And what this highlights again is an issue that is arguably currently very seriously neglected in the increasingly science-driven and technocratic feel of much current academic and policy discussions around ‘sustainability transitions’.

Themselves multiple and changing across diverse contexts, perhaps what must most remain strong in order to inspire, nurture and maintain transformations to sustainability are the qualities, conditions and imaginations of democratic struggle?